SXSW Interactive is a very cool conference … and I have a couple of chances to speak!

Here’s how it works – everyone with session ideas submits those a couple months in advance. Then the fine SXSW folks put up their SXSW Panel Picker. The Panel Picker is a cool idea – people planning to attend the conference actually get some say into what sessions will be held – how cool is that?

It’s pretty easy to vote on sessions. First, go register … then vote – there’s a thumbs up/thumbs down button! You can also leave a comment on each session (you have to register to do this stuff – but it’s free, so that’s cool).

Designing Your Customer’s Digital Experience
Visitors to an organization’s digital space don’t want to think about interacting with a website. They want to make a purchase, find an answer, or connect with someone – they want to have digital experiences. David introduces digital experience design for websites, and explains how website structure, community, and customers are parts of the total digital experience. This one’s obviously focused on my book. I’m hoping to do either a normal session or an author talk (they separate those from the main sessions). Either one would be cool.

Curating Cultural Content – Libraries Save Your Ass & Etchings
How are libraries responding to the firehose of cultural content when deciding how to curate digital media? What does it mean to be an online archive or library in an age of user-generated content? Librarians, quasi-librarians and techies will share tips ideas and the usual horror stories. Jessamyn West submitted this one – I’m listed as a panelist.

So – go vote (ok – only vote if you really WANT to hear these presentations)! And go to the conference. I guarantee you’ll learn something, and meet some interesting people, too.

Last session – let’s see if I can make it! And a funny aside – I was talking to two people before this session about sound boards of all things – one attendee and one SXSW volunteer. Turns out the volunteer is a librrarian who took a year off to write a novel (good for her), and the attendee – not sure who she is – actually attended another presentation and asked me what FRBR was, of all things! Wow.

If you flake, you’re out. Don’t leave the project before it’s done. Also share turntables – mix things up that don’t actually go together.

Learn how to deal with difficult people. (he worked with Michael Medved)

Henry Winkler says “say thank you” (panelist worked with him).

Ed Spielman says “Start with the poster…” Make believe the movie’s done. He’d get people to give him money … then they’d go write the script.

He transitioned into video games in the 90s.

What stuck with him in his transition was storytelling. Games are stories. In a gaming pitch he attended … the designers were focusing on the story.

To film makers – you should be able to transfer your writing ability to the gaming industry.

With film, you have a budget, can maybe just do 3 takes. With games, you can do whatever you want to do.

Talked about his transfer from film to gaming…

Ouch – he always loved film, made a documentary about a teacher affair with a student, got in trouble for that!

Loved PCs in college… After college, realized he didn’t want to program … so went to grad film school (I think).

Film helped him develop game pacing, how to make them more immersive.

He was a senior producer for Ultima – a virtual world game from the late 1990s.

With “suits” – in presentations, they mainly notice what you’re showing them – not what you’re actually telling them. So his background with storyboarding and quickly getting to the point helped – if you have this skill, you will get the gig.

They went through 1000 writers before they picked the 12-14 they kept. Wow. The writers take a writer’s test.

started off by playing a music video … I should probably know these guys … I’m hearing the sound guy say “she just wanted to play this video for walk-in music.” cool.

There’s a huge wall between you and your goal. This is for times when incremental changes don’t work.

Incremental can = an arms race – quality race or features race.

What’s stopping us from kicking ass?
– are your users stuck in P mode (like an SLR camera)?

How to know someone:
– ipod playlist
– flight vs invisibility – which one? We had to choose one and chat about it with the person beside us

Ask: what superpower do we give our users?
– hugely important question
– ie., auto-correct spelling man – not a superpower

Productivity man – it’s a superpower, but looks about as exciting as broccholi “because it’s good for you”

– superset game. ask “what is the bigger thing are these things a part of” when you want to go after something. Can be a lot more interesting and helps you make the bigger jump

– or what cooler thing is my thing a part of. ie – blogging about your company – not cool.

– Outliers thing – 10,000 hours. That’s not acceptable for Kathy, because she’s older. How do you shrink this?

– there are patterns and shortcuts – so learn the patterns. Also shorten the duration.

– Example – how does she get 10,000 hours in with horse riding? She has a work desk with a horse-shaped saddle seat. It’s better for her back, and she’s getting in more hours when she’s not really riding. Nice. (looked sorta funny though)

After 1-2 years, experience is a poor predictor of success – some people do that 1st year for 10 years.

To get better, work on your strengths instead of their weaknesses.

Do deliberate practice of the right things.

5. Make the right things easy and the wrong things hard.

She’s showing a pricey saddle she bought. Her ability made a huge jump – the saddle probably helped.

You sometimes have to convince others of this though… ie., you think you need more monitors and they will make you a better hacker. Your boss thinks – it will make you be a better gamer.

So find, make, and offer higher-end gear that bumps users to a new level.

– think clueless. Kathy and her husband were fired from their tech jobs, so they decided to write a book – and make it print-ready. People were saying “you can’t do this” with their headstart books – and they were successful … and stupid. Because they didn’t know what they were doing.

ABC – Always Be Closing. Gave some examples of groups that get together with a challenge, like writing songs – the main goal? By the end of the time-limit, you HAVE to have a song done, no matter how it is.

Who are your users, who’s your tech support (Aragorn or Jabba the Hut)

Your company is to your user as blank is to Frodo

What movie are your users in? (this was an exercise). What movie do they want to be in? … and don’t forget the soundtack.

If you want to make breakthroughs, don’t ask your users.

Listening to users – what they way vs what they really want

She stopped giving talks at microsoft because there was no bravery there.

13? Death by risk aversion – you got scared, and lost your big idea.

Ease-of-use police stop in, and we end up giving our users less than the big idea.

Re-examine stuff you sent to the deadpool. ie., $40 billion horse industry (even though the horse is obsolete)

So look at those things and see if they can have a new life.

With the headfirst books, they didn’t push around incremental sliders Instead, they added new sliders.

She’s asking – what did Gary do?

What did Gary add to the sliders? Gary says he talks about wine from the heart – no other people do that. Gary made wine fun. Gary was confident enough to talk about what HE thought wine tasted like, and shared that.

So – figure out what new labels and sliders you want…

A blog about people who mis-use the word “literally”

The blog of “unessessary” quote marks

Played a funny clip of a Conan interview of a guy who was giving a different perspective on flying (ie., it’s amazing!). So switch that outlook! 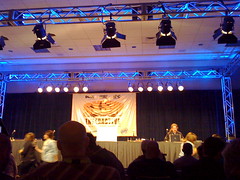 Well, not really. Or sort of, depending on your outlook! Here’s the deal – I am going, in a day and a half, to Austin, TX to South by Southwest Interactive, or SXSWi2009. Or just sxsw (ok, or #sxsw in Twitter).

For those not familiar with SXSW, it’s a cool webish, techie conference. Want to hear Heather Champ talk about flickr? She’ll be there. Charlene Li talk about Groundswell? She’ll be there too. Yes, to say I’m excited is a bit of an understatement 🙂

But here’s the deal – wanna come along for the ride?

There are a couple of ways to follow along on the conversations, the conference sessions, and probably even the partying (well, that last one’s a bit of a stretch, but still):

Easiest way = Read my blog!
I will blog most sessions I attend (I say most because there’s always a couple of stinkers at a large conference, or I get conferenced out towards the end). Hate my writing? Do a search for sxsw, sxswi, or sxsw2009 in Technorati or Google blog search to find other bloggers blogging away about all things sxsw. Or go to one of the popular sites like Mashable or Boing Boing – they’ll most likely be covering the conference pretty well.

Photos and Videos
I’ll also probably take some photos and some video, so click those links in the next couple of days, and you just might see and view interesting little tidbits of the conference. Don’t like my photos or videos? Search flickr or YouTube for sxsw and (my guess here) see a TON of videos and photos of sxsw happenings. For even more video, make sure to check out other sites like Vimeo or blip.tv.

Well, how about real time?
I will make sure to Twitter some. Even better – follow along with the twitter hashtag #sxsw, or if you discover some of the hashtags for individual conference sessions, you can follow along (and even participate) using those. For example, Beth Kanter plans to use #roi for one of her sessions.

And don’t forget the streaming video sites! I’ve heard of more than one speaker who plans to live stream their sessions. So check out uStream.tv, justin.tv, and qik.com for those.

So now you know where I’ll be and what I’ll be doing for the next 4-5 days. Feel free to follow along for free!

I had a great time at last year’s South by Southwest Interactive (SXSWi) conference – there were some great presentations focused exclusively on the social web, and I brought some cool ideas back.

The one problem? I also had to do some “translation work,” as most sessions were led by corporate or start-up types, and the conversations usually drifted to monetization, ad networks, and selling products. So, I did what I usually do when I don’t like something but see the value of it – I submitted my own panel ideas!

And this is where YOU can help … because people have to VOTE on these panel ideas (very cool). GO VOTE FOR MY PANEL! Go here – http://panelpicker.sxsw.com/ – set up an account, then find my two panel ideas. My two submissions are:

To vote, simply click on the “Your Vote” star rating thing.

So – go vote (voting ends on August 29), and if you can (whether or not I get to speak) go to the conference. It’s a great one for anyone interested in new media and web 2.0.

Update: also check out the list of potential non-profit-related sessions that Beth Kanter (of Beth’s Blog) put together. Lots of good stuff this time around (hopefully!).