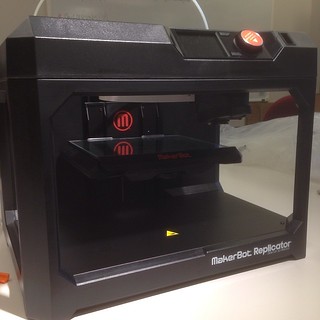 A little over a month or so ago, my library bought our first 3D printer, aÂ Makerbot – the newest, 5th Generation Makerbot.

Our goal is to put it out for public use this fall (one of the options in our planned makerspace/digital media lab).

But guess what? We can’t get the thing to work consistently. It’s easy to use, the controls are great, the filament is easy to load, and their new Smart Extruder print head is easy to work with.

Well – it’s easy to work with until there’s a jam or clog. Guess what? The Smart Extruder isn’t so smart when it comes to clogs, because you can’t really take the thing apart to unclog it.

We’ve had to send the extruder back to Makerbot and get a replacement … about 4-5 times now. In a month and a half.

Not good, Makerbot! I’m guessing you guys can do better than that!

Fingers crossed this gets figured out, or we’ll have to send the whole thing back and find another option.

So – who has 3D printers out for public use? Which ones? I’d love to know – especially if I have to find another one!