That’s a pretty big deal these days! I was affected just a teeny, tiny bit – I had a meeting about Instagram goal-setting for 2022, and couldn’t pull up current Instagram stats to share with the team.

Other people and small businesses who depend on one or more of these apps as their main communications platform were basically silenced for a good six hours. Not good!

They were down for approximately 6 hours, and are all back up again. So yay for that. But next time something major like Facebook goes down for a day … what can you do so your library isn’t completely silenced?

Thankfully, this is pretty simple. The answer is … Make sure you have multiple ways to communicate. And make sure those communication platforms aren’t all owned by the same company (i.e., Facebook, Microsoft, Apple, Google, Amazon, etc.).

For example, my library can currently communicate these ways:

There are probably others! My point is a simple one – don’t put all your eggs in one basket (as the saying goes). Make sure you have and use multiple communication channels, owned by different companies. Make sure you own some of them yourself, too (like your website and your email list).

And make sure you use more than one way to share your amazing library content with customers. Normally, that simply assures that more people hear about your cool new thing. But in times when something major goes down for a day (or more), you will still have multiple ways to communicate with your customers.

Well … this has certainly been a weird year so far.

One thing I have found odd (besides politics and a global pandemic) is simply having to let people know that the library is, in fact, open again!

That’s a REALLY strange thing to have to tell people. This year my library just celebrated its 150th anniversary. That’s 150 years of being open. Sure, we closed for things like snow days … but otherwise, we’ve been open for one hundred and fifty freaking years.

So having people ask “is the library open yet?” is a pretty strange thing to hear!

Here’s how we have been letting our community know we’re open:

My point? It’s important to let your community know that you are open (if you are). It’s also important to let people know when something changes – like opening up a curbside pickup service for the first time, or if there’s a change in service levels, open hours, meeting room use, etc.

Let your customers know what’s going on, and what to expect at the library. And make sure to keep sharing about your digital services, too!

You got this – keep going strong!

A couple days ago AT&T had a regional internet outage. I found out about it when I got home from work – my family said “hey dad, the wifi is acting up.” So I did all the normal stuff – checked the router, rebooted it a couple of times, etc.

That didn’t work, so I checked Twitter and discovered that AT&T has a “helpful” support account: @ATTCares.

The @ATTCares account says this in the profile: “Want help from a real person? Tweet your issue to our team of problem solvers. We love a challenge, and we know how to find the answers.”

The network outage was a large, multi-state problem, and lasted a good 6-7 hours at least. Through it all … AT&T didn’t acknowledge that there was a problem or say anything about a service interruption on their Twitter account.

What I saw instead was this:

I tweeted them, and didn’t get a reply until 10am this morning (the problem was fixed by then).

So I read a book, went to bed, and the problem was fixed by morning. Oddly enough, at 10am this morning @ATTCares finally responded to me by saying this:

Good morning, David. We appreciate you taking the time to make sure that we are aware of the issue and want you to know that technicians are already working toward a resolution as quick as possible. We apologize for this inconvenience ^AriO

So. What could AT&T have done differently?

Ok. So does your library ever have an outage, or a service that isn’t in operation for awhile? I’ll guess so. How do you share those issues with your customers?

Here’s what my library does:

Make sure to share so your customers know what’s going on. Another way to say that: don’t be like ATTCares! 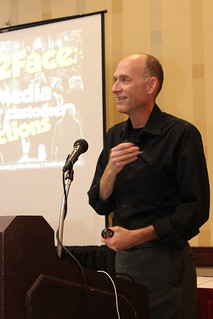 I do a lot of public speaking – at library conferences and for my library in our community. I like it and think it’s sorta fun.

If you don’t like public speaking, or if you have just never really done it – why learn to speak in public?

Here are some reasons for public speaking:

That’s what I think, anyway. What should I add here? Let me know! Also – here are a couple of other articles on reasons to improve public speaking:

Here’s a heads-up about a cool and useful book on how to improve your networking skills. The book is 21 Days to Success Through Networking: The Life and Times of Gnik RowtenÂ (Amazon affiliate link), published by Information Today (yep, that’s my publisher).

They gave me an advance copy, and I LOVED it. Why? Well, for two reasons:

So – fun read, and I learned something, too!

Here’s a little more about the book, from the publisher:

21 Days to Success Through Networking: The Life and Times of Gnik RowtenÂ presents a range of real-world situations, events, insights, and challenges through the eyes of a fictional character with whom almost anyone can relate. Gnik Rowten (thatâ€™s â€œnetworkingâ€ spelled backward) has made a fresh start in a new city where he has few, if any, friends, prospects, or business contacts.

Follow Gnikâ€™s life over a 3-week period as, each day, he discovers and learns tools, techniques, and strategies for effective business networking. Through sharing his adventures and â€œAha!â€ moments, youâ€™ll learn to extend, deepen, and effectively utilize your own personal and business networks in just 21 days.

Here’s the Amazon link to buy the bookÂ (Amazon affiliate link). If you want to help out the authors, buy it today! Why? They have an interesting goal of being Amazon best sellers â€¦ today. So – help em out!