Just a head’s up about next week for y’all. On Monday-Thursday, I will be frantically attending three concurrent conferences in New York City:

And if you can believe it, I’ll attempt to blog the whole thing! Well, my view of the whole thing, anyway. So – look for a bunch of session notes type blog posts next week about anything from ebooks and publishers to how to improve a podcast. Maybe even a video or two.

My posts will be heavy on the Blogworld side of things, but there are some really interesting-sounding ebooks/publishers/libraries talks going on too, and I think both you and I will find those interesting!

Yessirree, I will be in geek heaven. Just sayin 🙂

The always excellent Blake Carver, who runs LISNews and LISHost (they do an awesome job of hosting my website), has recently created a new tool for us library types – LISEvents.

Here’s what Blake says about LISEvents:

“LISEvents is a community-based site intended to aggregate listings of library-related events of all types, sizes, and locations. The site also helps speakers find gigs and event planners find speakers.”

Blake’s goal is to list every conference,large and small, that might be of interest to those of us working in libraries. There’s also a place for speakers (just added myself).

So – check it out, add your library-related events, and add yourself, if you like that public speaking thing!

This past Saturday, Topeka & Shawnee County Public Library co-hosted (with WIBW Studios) our first Podcamp  – Podcamp Topeka. Don’t know what a podcamp is? It’s an unconference dedicated to web 2.0 tools and social media (read more about them here). It was a blast! You can some of my notes from the day here, watch my video about it above, and you can read Brandon Sheley’s notes here (he attended and lead a session or two), and even watch a quick video from channel 49 news.

So – how did I organize this thing?

OK – first things first. It’s a podcamp – there’s really not much conference planning to do. The details revolve around meeting rooms, food, and potential schwag – not the actual conference schedule. The important planning revolves around how many people you hope to attract – you have to have enough space to accomodate them. Also how long each session should be – and be able to accomodate that. Then, it runs itself (more on that in a minute).

Use your contacts for help. I poked around a bit on the interwebs, and found out Ryan Deschamps, cool librarian and blogger at The Other Librarian, had organized some very successful podcamps. So I asked him for tips, and he emailed me some great advice on how to run a podcamp.

Sponsorships – the library provided meeting rooms and our other sponsor, WIBW, paid for food and t-shirts. How’d that happen? In this case, I know Jim Ogle, the general manager of WIBW, and also know he’s excited as I am about social media and 2.0 stuff. So I asked him if he wanted to help plan the podcamp, and he did … and he ended up being a sponsor, too. For future events, I’m told that some local organizations might potentially be interested in sponsoring the event.

Ask for Specifics. Know how much money you need up-front, then ask specifically for your needs! Much better to have a plan for what you need (and what they’ll get out of a sponsorship) than to vaguely ask for “a sponsorship” hoping someone will provide what you need.

Registration: it was a free event, but I asked everyone to register, since a head-count was involved for t-shirts and food. Eventbrite worked GREAT for this! Free and easy to use – we had over 100 registrations. I was able to email a reminder to all attendees 3-4 days before the event through Eventbrite’s admin side. They actually sent me a couple of pre-event emails making suggestions on how to run an event (ie., do you have nametags?), too.

Interestingly, we had an odd but fun mix of people. We had a variety of skill levels from experienced user of 2.0 tools to extreme novices and an age spread from probably age 20 -85 (someone actually came up afterwards and told me how old she and her friend were). So we improvised a “Basics of Social media” session that turned into one of our larger sessions.

Food and t-shirts: I went ahead and ordered t-shirts and food for 150, not knowing how many would really show up. So we had … a LOT of food. And I have a box of Podcamp Topeka T-Shirts in my office…

Schedule: You can see it here – we ended up with quite a few great topics and sessions!

Advertising: This is interesting. We advertised in our library newsletter, in 2.0 tools (twitter, facebook), on our website, at a social media group’s Ning site, and were lucky enough to get a TV spot or two (since WIBW was a co-sponsor). We asked attendees to fill out a “how you heard about this” flyer – only 22 people filled it out. But look at their responses to where they heard about our podcamp:

And finally, Feedback. What did attendees think of the day? Honestly, most of the feedback I received was some form of this – “What a GREAT day! When’s the next one?”

So – we’ll have to start planning the next Podcamp Topeka, I guess! 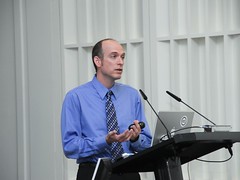 I’ll be doing a bit of speaking, traveling, and conference attending this year – here’s where I’ll be through July:

And more to come, I’m sure. Make sure to say hi – always more fun when I know people! 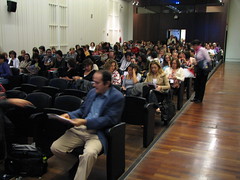 The last conference I spoke at in Spain was for SEDIC (Asociacion Espanola de Documentacion e Informacion) in Madrid. Here are the notes I took during the other sessions.

Isabel Fernandez spoke next about the wiki they set up for the Learning 2.0 program:

It was a great day, great content, and wonderful librarians.