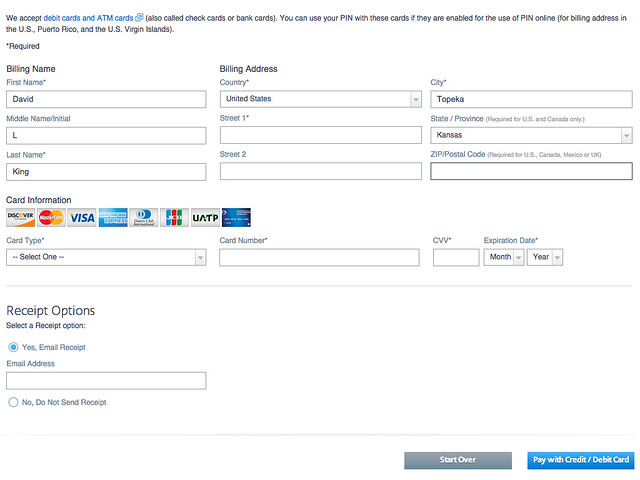 On Friday, I was gettingÂ ready to fly to Monterey, CA for Internet Librarian 2014, and needed to pay for something on my flight with American Airlines. The screenshot above is the credit card payment page on American Airline’s website.

It’s weird. Instead of running your name, address, etc left to right, they run everything up to down. So my name? There are three vertical boxes for first, middle initial, and last.

That’s pretty much like no other credit card page ever.

And it forcedÂ me to think about the functionality of the page. For example, I really, really wanted to type my middle initial in the Country box, and my last name in the City box. Then, since I’m used to typing left to right, when I reached the Street address box, I couldn’t enter my cityÂ next. I had to search for the City box … because 9 times out of 10, most of usÂ generally type address, city, state, zipcode. Except, apparently, for American Airlines.

So instead of thinking about my purchase (paying $15 extra to board in group 1), I was having to think about where to type my middle initial and my city.

My point? Don’t ever forceÂ your website visitors to have to think about your website and your poorly-done forms. Keep website visitorsÂ focused and thinking about the things they really want to do (i.e., check out a book! borrow a movie! read your cool blog post! etc). 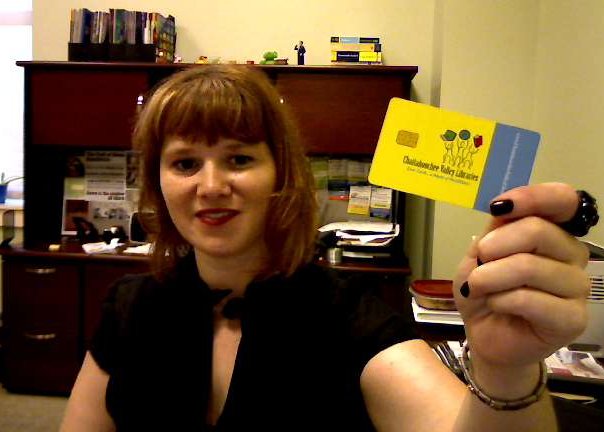 If you havenâ€™t seen it yet, go read Bobbi Newmanâ€™s article on Why Libraries Should Look Beyond Library Card Ownership as a Measure of Support. Bobbi sometimes has a slightly different perspective than me, so her articles make me think.

Yes â€¦ but. Itâ€™s also a problem of simple marketing. We arenâ€™t offering something those people want, so they donâ€™t use the library.
Perhaps we should ask them about their information/entertainment/distraction needs, and see if we can meet those?

I wanted to expand that thought a bit more – hence this article!Â The point that hit me in Bobbiâ€™s post was her last paragraph:

Rather than focusing on the percentage of the community that has a library card, libraries would be better off focusing on public support of the library and accepting that some people donâ€™t use the library for one reason or another.

Do I agree with that? Well, yes and no. Hereâ€™s what I mean.

No, I donâ€™t agree with Bobbi:

First off, for my original response. I think many libraries could get more cardholders simply by:

Thatâ€™s basic marketing and promotion, and most of us library types really don’t do marketing and promotion all that well. Figure it out, and youâ€™ll get more cardholders – simple (well, not really simple. But you get my drift).Â There are definitely â€œpotential cardholdersâ€ out there who want your libraryâ€™s services â€¦ they just havenâ€™t yet bothered to get a library card for one reason or another. With a little nudging, they just might get one.

Then again, focusing on â€œpeople who donâ€™t have library cardsâ€ is probably NOT the best approach. Your library should have a strategic plan focused on narrower groups of people.

For example, maybe one of your libraryâ€™s long-range goals is to attract more kids age 5-10 to the library.Â In this case, who should you target? Certainly not everyone, and not â€œpeople without library cards.â€ Why? Because not all of those people have kids age 5-10.

Instead, you should focus pretty specifically on young parents. Do that well, and you will attract more library card holders â€¦ within that targeted group. In the process, you’ll be working towards achieving that long-range goal.

Or, for something completely different – donâ€™t work too hard on those people who donâ€™t use your services. Instead, why not focus pretty heavily on your current customers?Â For example, my library has 92,000 or so library card holders. Why not provide those library users with the most awesome library experience ever? Or even narrow that down further to our most engaged customers (those Library Lovers that Bobbie mentions)?

Focus on that top 1% of your most engaged customers, and they will do quite a bit of word-of-mouth marketing for you. Other businesses and brands do this pretty successfully all the time. For example:

Here are a couple more articles on that concept:

So … what do you think? What’s your response to Bobbi’s article, and to the Pew Report she mentions? Ever thought about this? With two physical, brick-and-mortar library branches, you have to use them one at a time. Can’t use both at once!

But with a digital branch, you can. You can be in the physical library building, and can use the digital branch at the same time. You might be reading an article, checking out an ebook on your mobile device, asking a question via live chat, or wandering the stacks with smartphone in hand, looking for a book.

But you can use both. At the same time. And people do.

Hmm … good signage, comfortable seating, and power. What else? What am I missing? Has your library ever really thought about the experience around becoming a library card holder, or worked to improve it?

At most libraries, when someone gets a library card for the first time, here’s what we do: we give the person their library card. We might also hand them a printed list of either “stuff you can do” or “stuff you can’t do ” (i.e., rules, regulations and circulation policies).

Are balloons released? Does anyone celebrate? Does it usher our new customer into some cool, “members-only” club? Do we follow-up with the customer after 3 months or so to see how it’s going? Nope. For most of us, nothing else happens.

What happens with other types of membership cards?

Now back to libraries. Is there something else we can do with a library card to make it more “membership” friendly? Reword that brochure we give out? Check back with our customers after 3 months to see how they’re doing (remember, we have their email address and snail mail address)?

How about give perks for use? For example, if they check out five books, they get that 3-day express movie for a week?

What do you think? Anyone do something special for library card holders that isn’t just “here’s your card, now go check stuff out?”