I recently bought a new bass guitar from Sweetwater Sound, and loved the customer experience they provide.

I’ll walk you through some of the stuff they did to make my buying experience a good one, then share something fun that could work well for libraries.

Here are some of the things they do to make sure my experience buying stuff from them is a good one:

I’ve bought a TON of stuff online – probably you have too. This level of service is not normal, at least for a “big box” online music store. So … very nice customer experience!

How does this relate to libraries?

How often do we thank people for using our services? For checking stuff out …. For asking a question … for using one of our databases … for attending a class or event at the library?

Yes, mine was an online experience, so it’s easy enough to stuff something in a box before you ship it. But we have the opportunity to thank people in person, which can have a much greater impact than stuff tossed into a box (though the candy was … sweet!).

And I LOVE the idea of the #newgearday hashtag. That’s certainly something we can do. Does your library have a hashtag? If so … print out a bookmark or postcard that encourages people to share their #nextread or something like that.

And then share those photos on your website (here’s how Sweetwater shares some of the #newgearday images). Use them in promotions (and yes, get permission). It’s a really simple way to connect with your customers, and to let them share their joy of reading with your community (and a sneaky way to share them with you, too). 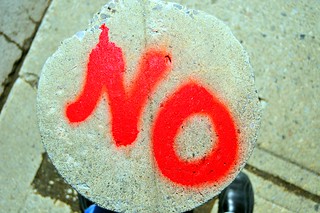 Last year, I attended a presentation focused on convincing staff to use a new tool the library had purchased. The presentation offered up different ideas on how to do that.

The presenter (and, I assume, the library) didn’t seem to want to make learning the new tool mandatory, and were concerned that they might have to do that at some point.

Anyone else hear a problem with that concept? I sure did. I think there’s a better way to function.

Now … volunteering to do something can be perfectly fine, in the right context. For example, maybe the task isn’t in your job description but it needs to get done while someone else is out on extended leave, or maybe you do it in an interim capacity until someone else is hired.

Also, volunteering is fine during a pilot project phase. You know, that “we’re just testing this out and need feedback” phase.

But once the job or function or service is more formally offered by the library? Don’t take volunteers. No “convincing” needed.

Instead, assign the new service or tool or project to someone (a person, a department, everyone, etc), and expect that they will do that thing (whatever it is) or learn it in order to help customers. Also think about making sure someone is in charge of getting everyone trained, if you don’t already have a training program in place for it.

After that? No convincing needed. It’s now part of someone’s job – just like working the reference desk, building a website, or cataloging a book.

A couple days ago AT&T had a regional internet outage. I found out about it when I got home from work – my family said “hey dad, the wifi is acting up.” So I did all the normal stuff – checked the router, rebooted it a couple of times, etc.

That didn’t work, so I checked Twitter and discovered that AT&T has a “helpful” support account: @ATTCares.

The @ATTCares account says this in the profile: “Want help from a real person? Tweet your issue to our team of problem solvers. We love a challenge, and we know how to find the answers.”

The network outage was a large, multi-state problem, and lasted a good 6-7 hours at least. Through it all … AT&T didn’t acknowledge that there was a problem or say anything about a service interruption on their Twitter account.

What I saw instead was this:

I tweeted them, and didn’t get a reply until 10am this morning (the problem was fixed by then).

So I read a book, went to bed, and the problem was fixed by morning. Oddly enough, at 10am this morning @ATTCares finally responded to me by saying this:

Good morning, David. We appreciate you taking the time to make sure that we are aware of the issue and want you to know that technicians are already working toward a resolution as quick as possible. We apologize for this inconvenience ^AriO

So. What could AT&T have done differently?

Ok. So does your library ever have an outage, or a service that isn’t in operation for awhile? I’ll guess so. How do you share those issues with your customers?

Here’s what my library does:

Make sure to share so your customers know what’s going on. Another way to say that: don’t be like ATTCares! 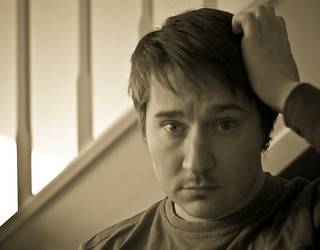 The hard part is the people.

Here’s an example of what I mean: Last year, my library’s biggest technology project was our RFID/Self Check project. It included tagging every item in the collection with an RFID tag and installing eleven self check kiosks throughout the building.

The technologyÂ part was easy – we worked with our vendors to make sure the kiosks worked, the new RFID gates went up, and the RFID tagging stations worked.

The hard part was “everything else,” which included:

And I’m sure I’m forgetting something. Has the technology been flawless? No – it’s technology. Something WILL go wrong.

But the “people” part – that affects everyone. You want to make sure the technology parts are done right. But also make certain to get the most important parts of your project right, too. The people parts. 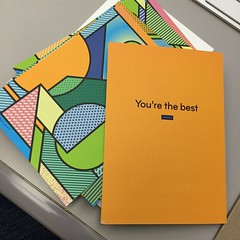 Moo Cards really knows how to make me smile. They recently did just that – by sending me some free stuff!

Right before Christmas, I received a small package from Moo. Odd, because I hadn’t ordered anything from them. What was in it? Some blank cards and envelopes. Designed by Rob Lowe (not the movie actor).

The note that came with the package said this: “Did you know you’re one of MOO’s best customers?” My best guess is that they thanked all their 2014 customers by sending stuff out to them.

Pretty nice of them. And sorta cool, too. I know I’m NOT one of their best customers. I’ve ordered some business cards from them – a couple of times. Nothing more!

And yet, the way they treat their customers – like you really are one of their best customers – is refreshing.

And makes me want to buy from them again.

So … do we work on delighting our customers? I’m not sure. If we work really hard at having the best, newest books in the library, or having the fastest internet, or setting up a new bookmobile stop … that’s not customer delight. That’s business as usual. Delight comes from something unexpected, and these types of things are something our customers expect. All good things – just not something that warrants customer delight.

If you really, truly worked harder in 2015 on delighting your customers – what three things would you focus on?

Hmm – I’ll have to think on that one myself.