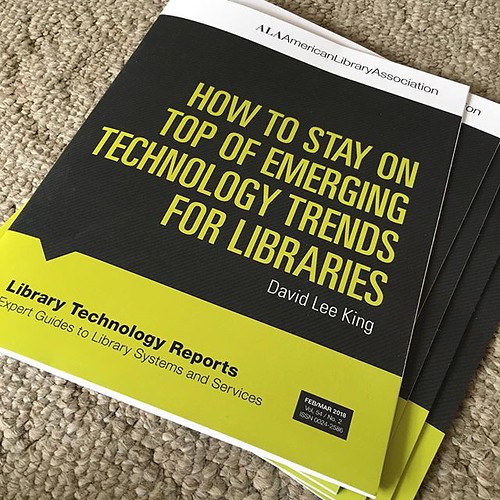 My new Library Technology Report is out! It’s titled How to Stay on Top of Emerging Technology Trends for Libraries. It focuses on how to monitor emerging technology trends and how to incorporate those trends into your library when it makes sense.

Technology has changed the face of libraries and is continuing to change how we work and how we deliver services to our library customers. This issue of Library Technology Reports (vol. 54, no. 2), “How to Stay on Top of Emerging Technology Trends for Libraries,” focuses on personal strategies you can follow to keep up with emerging technology trends and provides you with suggestions for how you can incorporate these trends into your library. Author David Lee King, Digital Services Director at Topeka & Shawnee County Public Library, explores four major areas in this report: why you should stay on top of technology trends, the trend watchers you should follow and how to follow them, practical ways to incorporate new technology trends into your library, and how to prepare for and know when not to pursue current trends. The goal of this issue of Library Technology Reports is to help you become better prepared for technology changes now and in the future.

Want to buy it? Here’s the link. Hope you find it useful!

I’ve had a Fitbit (the Fitbit Flex 2) for about 4 months. What do I think about it so far?

It works great for the primary reason I wanted one: it vibrates when I get a phone call or a text message. I don’t always hear my phone, especially in a noisy room (you can probably blame my 30+ years of playing drums for that).

But of course, the Fitbit Flex 2 does other “fitbit-y” stuff. What do I think about those features?

That’s pretty much all the Fitbit Flex 2 does (I did buy the cheap one, after all). The Fitbit app can track more things like calories eaten, pounds lost, and how much water I drink. But I have to enter things into the app to track them. Again – not really interested.

That said, I like tracking other things. For example, I sometimes bike, and that’s fun to track with the Runkeeper app. It can track things like a map of where I biked, my average pace, and total miles biked. So that’s pretty useful.

Where am I going with this? A few random thoughts:

Are there library uses for wearables? Sure there are – keeping staff healthy by offering step-counting walking incentives (some health insurance plans do that), learning about new technology (i.e. wearables), and providing teaching opportunities for customers all come to mind. There might be others!

What do you think? Do you own a wearable? And do you like it? Why? Please share!

I just got back from a full week of learning and sharing at Computers in Libraries. Great conference, as usual!

Here are links to the presentations I gave:

I was on the Dead & Emerging Tech panel this year at Computers in Libraries, so here are my slides.

This panel is supposed to be entertaining and provocative (and hopefully have some good thoughts too), so it was tricky to do, but fun too.