At last week’s Internet Librarian 2019 conference, I made a video of the Tuesday evening session, titled “Wizards, Prophets & Our Future!”

Make sure to watch – it was a fun event, packed full of thinking about libraries and the future. Also give yourself a bit of time – it’s an hour long!

Here’s the session description: Based on the book by Charles C. Mann, The Wizard and the Prophet: Two Remarkable Scientists and Their Dueling Visions to Shape Tomorrow’s World (psmag.com/environment/saving-the-world-with-wizards-and-prophets), our speakers share their ideas on how to use smart tech, AI, and IOT to save libraries and the world. Whether it stands for artificial intelligence, intelligent assistants, or the art of information, AI and other new evolving technologies such as spatial/ immersive computing (AR/VR+), robotics, etc., will definitely have strong impacts on our future. Hear how our Wizards and Prophets imagine the way libraries may evolve in smart solutions for a smart and caring world. In the end, the audience decides for themselves whether to follow the Wizards, the Prophets, or their own paths. Full of fun, ideas, imagination, stimulation and learning, come grow your thoughts about the future and your community. 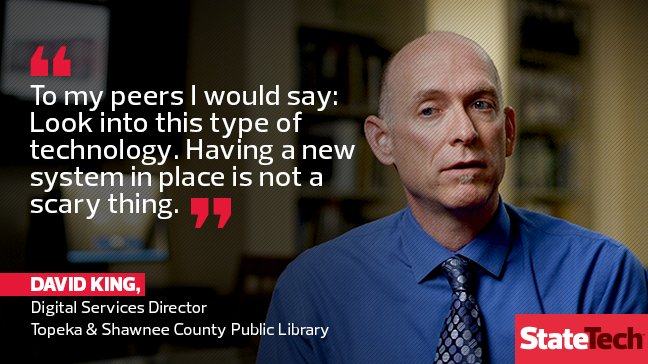 My library was recently featured in StateTech magazine. We recently upgraded our data center to a Nutanix hyperconverged infrastructure (click the links to read more about that). It’s pretty cool, and is already saving my IT staff time, and has killed a bottleneck we were having on the back-end. So yay for that!

What did StateTech magazine do? Two things – an article and a video:

So why did we decide to be featured in a vendor’s trade magazine? Because it’s good publicity for us locally – it shows that the library is being responsible and is moving forward with technology, which our community wants us to do (they have shared that before).

And it’s one little way that we can help the larger library community. By sharing what we do in a tech trade magazine that usually features city and state government IT projects, I think it helps give readers (i.e., those IT people that municipal libraries often deal with) an understanding of what THEIR local libraries should be doing. It’s a way to get city IT staff on the library’s side when it comes to budget time and technology upgrades.

Yesterday, there was an op-ed in the Wall Street Journal titled In the Age of Google, Librarians Get Shelved (now behind a paywall for some – fyi!). You should all go read the article. Then come back, and let’s discuss.

Ok … first off, the article is completely wrong about libraries and librarians. It’s based on no library I’ve ever been to.

But here’s the rub. The article is written by someone who works in libraries. You can even Google the author and find out where he works, if you’re so inclined.

And that’s why I’m suggesting that you read the article (and why I’m linking to it): You, my dear, awesome reader, have people working in your library that believe this stuff.

No, not most of your staff. But perhaps a couple. You might even have a board member or library leader who believes this. You certainly have someone in your community that believes it.

Your job is to come up with short, factual answers to each of the author’s challenges.

Why? Because at some point, you will be asked why you exist in the Age of Google … and you need to have solid, understandable answers.

Image from the unquiet librarian 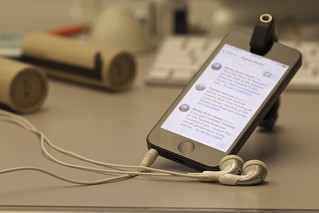 I’m still at Computers in Libraries 2015 – great conference as usual!

I also just saw this from Gary Price on InfoDocket, and thought it was worth sharing.

Here’s what ComScore says about this: “While the share of mobile-only users has climbed over the past year to 11.3 percent, the desktop-only population has drastically declined to just 10.6 percent. Of course these numbers also tell us that the vast majority of the digital population (78 percent) is multi-platform and goes online using both desktop and mobile platforms.”

What’s this mean? More of our us are carrying the internet around in our pockets, bags, and hands. We’re in front of small screens more often than we are in front of a desktop computer, which makes sense.

It also means that we need to make absolutely certain that our library and organization websites work on mobile devices. Having a great mobile-friendly website is more important than having it work fine on a desktop computer. Why? Because our customers are in front of the small screen more often, andÂ have access to a small screen more often, than desktop or laptop computers.

So – how’s your website’s mobile experience? Not too hot? If not, then … it’s time to start working on it!

Photo of my iPhone taken by me People love to talk about the future of libraries. Here are two pretty different viewpoints:

A couple days ago, TechCrunch published The End of the Library, written by MG Siegler. In it, Mr. Siegler says this:

Um. Dude. That’s like saying “I hate Macs! And I’ve never even used one!” At least go visit one before writing about them (I hear there’s a pretty fine library in San Francisco).

Unfortunately, articles like this make me wonder about the editorial integrity of TechCrunch. They apparently allow writers to publish opinion pieces with absolutely no experience about the topic, (which Mr. Siegler admits to). What about all those other articles on TechCrunch? Hmm…

Around the same time, Neil Gaiman wroteÂ Why our future depends on libraries, reading and daydreaming in the Guardian. In his article,Â Neil says this about libraries:

“But libraries are about freedom. Freedom to read, freedom of ideas, freedom of communication. They are about education (which is not a process that finishes the day we leave school or university), about entertainment, about making safe spaces, and about access to information.

I worry that here in the 21st century people misunderstand what libraries are and the purpose of them. If you perceive a library as a shelf of books, it may seem antiquated or outdated in a world in which most, but not all, books in print exist digitally. But that is to miss the point fundamentally.

So. Neil Gaiman speaks from experience. He’s been in and around libraries his whole life. MG Seigler admits to not remembering the last time he was in a library.

Who ya gonna believe?

photo of MG Siegler by TechCrunch