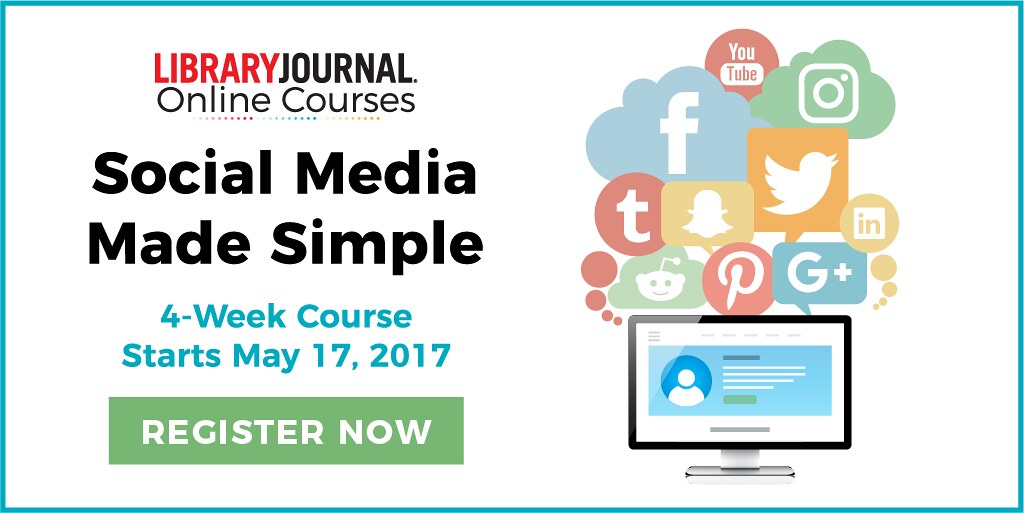 Here’s a description of the course:

Learn tools and tactics to help you use social media to build your outreach to current and future patrons. This 4-week online course mixes live keynote presentations and hands-on projects in an online workshop setting. You’ll receive one-on-one guidance from an experienced social media library luminary.

I’m one of the “real time guest speakers” – I’m giving a webinar next Wednesday for the course.

And on to the Discount! Library Journal gave me a discount code – DLK25 – if you use this code (or click the links in this post to the registration page – they have the code embedded into the link), you’ll get 25% off the normal price. Sorta cool!

So – sign up for the course, and learn a TON about reaching your community through social media.

How did we win Library of the Year? Well … we are awesome 🙂

Or, if you want to know the details, watch the interview I did with Gina Millsap, our CEO. And you can find out more in these articles about the library and the award:

Just saw the 2009 list of Library Journal Movers & Shakers. Can I just say there are a LOT of very awesome people in that list this year! FYI – check out Bobbi Newman’s list – it’s handy.

Also, there are lots of cool people I know in that list, including Michael, Sarah, Chad, Eric, Jaap, Geert, Karen, Jason, Joe, Lauren, Lori, Jenica, etc, etc etc – awesome (if I forgot you, please kick me later – I’m tired!). Congratulations to every single Mover & Shaker – each of you has earned this – way to go!

And an interesting aside – Bobbi’s list links both to the LJ write-ups on each person, and to their blogs if they have one. Did you notice? There are more bloggers than non-bloggers in the list. Just sayin. What’s more ironic than Michael Gorman complaining about blogs and wikis on the Encyclopaedia Britannica’s blog? How about Library Journal’s recent decision to host the Annoyed Librarian’s anonymous blog?

Yep – that’s right. The same organization that publishes the Transparent Library column is now giving voice to … an anonymous blogger.

Library Journal claims to be “the oldest and most respected publication covering the library field.” I’ll ask – do you respect a publication that allows one of their writers to be anonymous, when that anonymity has been used in the past to attack other librarians and the work they do? Who also allows and encourages other librarians to anonymously say mean, hateful things in the comments of his/her anonymous blog? To me, that’s simply juvenile and irresponsible.

And now that same juvenile, irresponsible behavior has been paid, and has been given a voice … by “the oldest and most respected publication covering the library field.” Hmm… another irony noted.

Don’t get me wrong – I’m all for tearing down bad ideas, pointing out inconsistencies, sharing what I think … and have no problem when people do the same with me. That’s expected. But I also think it’s important to own one’s words … and you simply can’t do that when you’re anonymous. Maybe just me – but I think if you can’t say it when your name’s attached … maybe you shouldn’t say it at all.

So when a “respected” library publication starts writing with an anonymous voice, I get concerned.

Library Journal – As a 2008 Mover and Shaker, and as one who has been published in Library Journal publications in the past, I stand behind the words I write, and I expect you to do the same.

Readers – what do you think? I’d like to know.