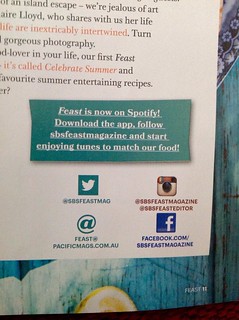 I followÂ Ellen Forsyth, a really smart Australian librarian, on Flickr. Yesterday, I saw this image in her photo stream (see the pic in this post).

Feast magazine has created a Spotify account. Here’s what the magazine says about it:

We are excited to announce that Feast is now on Spotify! Join us at sbsfeastmagazine to listen to the new additions to our profile: a Greek-themed playlist to match our Global Roaming story on life in Lesvos, and Christmas songs from around the world to get you in the spirit while you whip up festive goodies. Old favourites abound in â€˜Char Timeâ€™ for tunes while you grill, and â€˜Celebrate: Diwaliâ€™ to channel your inner Bollywood star are still online as well.

What a cool idea! Can libraries do this? I bet so. Spotify (huge music streaming service, for those not familiar with Spotify) allows users to create and share playlists of music.

A library could easily set up some fun playlists. Some examples:

What do you think? Has any library done this? Please share!

The short version: My library wrote and recorded a song, and hereâ€™s the Youtube video for it! You can also:

Â Longer version: Why did we do this?

Earlier this year, my library remodeled the kids area of the library and rebranded it the Kids Library. Part of our grand opening included some of our YA staff writing a song, and library staff performed the song at the grand opening (I played drums! Video here).

Our Marketing Director liked the song so much that she sent the â€œlibrary bandâ€ to a local recordingÂ studio to have the song professionally recorded.

Then we decided to go all out with it. I did a number of things with the song:

Whatâ€™s our goal? We simply want to share the song on our website, with our community, and with other libraries and librarians. The nice thing about the song? Itâ€™s very library-focused. So if other libraries wanted to use the song as opening theme music for their kids events, it might work well.

Difficulties along the way. There was a bit of a learning curve for me, mainly with CDBaby:

So – watch some of us (including yours truly) be a bit goofy and have some fun in the video. Listen to the song. If you think it might work for your library (or if you just like the song), please buy it!

Every once in awhile, I receive a copyright takedown request for one of my videos. In two recent cases, I challenged the process and ultimately won – which means I didn’t have to take down or change the music bed to my video. Here’s what happened in both cases:

Case #1 – Prince and SirsiDynix. In 2010, at ALA Annual, I was invited to a SirsiDynix party. I went, video camera in hand, and took a short video of some dancing librarians. The song, played by a cover band, was Kiss by Prince. The video’s about 30 seconds long.

I posted a version of this video to my Vimeo account, and last year I received a takedown notice from Vimeo, saying that Prince (i.e., most likely some third party company hired to find his songs on the web?) was claiming a copyright infringement.

Late last year, I received a message from Youtube, saying that INgrooves was claiming the song was theirs.

In both cases, just by following through with an appropriate response, I was able to keep the video up with music intact.

Why share this? Because you might have to do the same for your organization or your personal video account at some point. If that happens, here’s a really simple tip (which I plan to start doing) – in the video description section of your Youtube post (I’ll use Youtube as an example), mention where the music came from. Be specific about it, too – where you found it (with a URL), if it had a Creative Commons license, if you wrote and performed it, if it was a loop-based creation, if it came with your video editing program, etc.

Do this as a reminder to yourself. Then, if you ever receive a Copyright notice or a takedown request, you’ll know where the music came from! 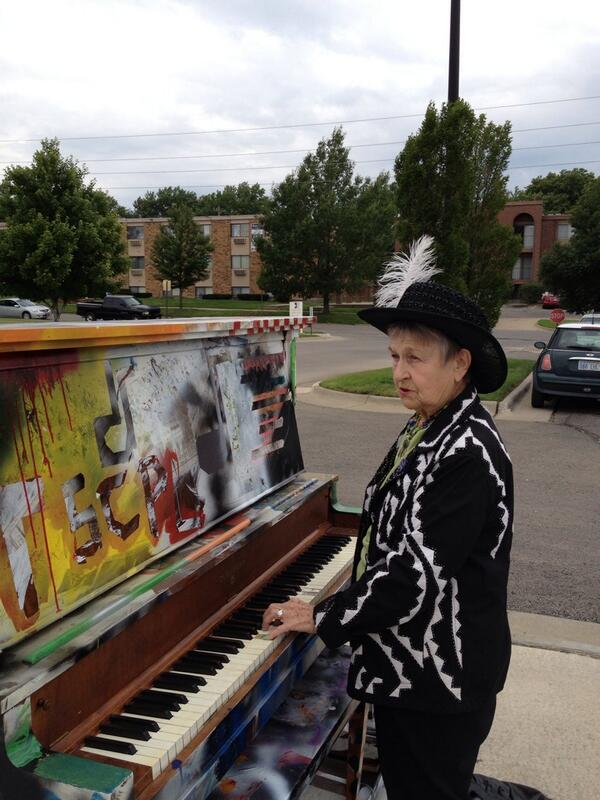 Have you heard about street pianos? Some cities have taken old upright pianos, refurbished them, had an artist paint them, and have “installed” them in public spaces.

The goal? Let anyone who wants to … play the piano, and share some music – good or bad – with their local community at the same time.

My library heard about the idea, had a piano donated to us, painted it, and it’s now outside the library, ready for anyone to play. It’s been outside just a few days … I just saw two teens sitting at the piano, wailing away.

Has your library done a similar idea? I’d love to hear about it!

Did you catch this article last week on CNN? Digital Music tops Physical Music Sales. Here’s a couple of quotes from the article:

“According to a Nielsen and Billboard report, digital music purchases accounted for 50.3% of music sales in 2011. Digital sales were up 8.4% from the previous year, while physical album sales declined 5%.”

“While services like NapsterÂ blazed the trailÂ for online music consumption, offerings like Apple’s 99-cents-a-song iTunes catalog as well as those from a host of startups have broken down traditional music-purchasing barriers. Most customers now prefer shopping online to buying in a store.”

For that matter, you don’t even have to buy music to enjoy it anymore. We finally took down our Christmas decorations last weekend. While doing that, we listened to some classic jazz via Pandora. Obviously, a radio would work here too … but not for the type of music I was listening to!

So … libraries and music. My public library has a pretty large CD collection. We also subscribe to Freegal (a library-oriented service that basically gives patrons 3 free music downloads a week). We have also seen a demo for the library version of Rdio (not impressed yet).

In five year’s time, what will we be doing? How will we be collecting music? Will music still be listed for checkout in our library catalogs? Or will we point patrons to Spotify/Pandora/Rdio/etc?