In January, I made a short time lapse video of me shoveling snow off my driveway (see the video embedded in this blog post if you’re interested!). Because I think doing that type of thing is sorta fun (the video – not the shoveling!).

Then I decided to do an experiment with it. So I posted it to multiple social media platforms to see how many views I’d get from each one. Here are my results to date:

So … that was fun! What was the point? Well, a couple of things:

Here are a couple things to point out about this exercise for libraries:

Posting to multiple platforms can also show where your strengths and weaknesses are with those platforms (so you can figure out what needs to happen next).

Something to think about – hope you find this useful!

Yes, I had a new iPhone waiting for me when I got home from Florida (among other things). I upgraded to the new iPhone 3GS … which takes video! Here’s what I’m finding out so far about the video quality:

One of my first videos, uploaded to blip.tv:

The video quality is about the same as you’d find on a Flip camera, so not too shabby! It films in QuickTime .mov format, using AAC for audio and H.264 for the video codec. It makes a standard-sized video of 640X480 when held in landscape mode.

Here’s a video I uploaded directly to YouTube (the new iPhone allows you to do that):

So – I like having a video camera ALWAYS with me, in my pocket. What I’m not quite used to yet is how the iPhone decides when it’s going to be in landscape or vertical modes. For example, this video …

And that’s not the only place I’ve discovered quirks. Look what happened in iPhoto! 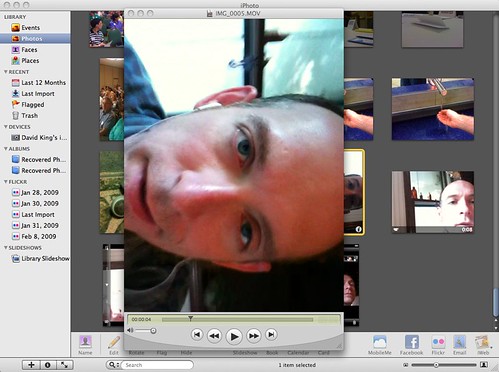 Even weirder in iMovie – check out the thumbnails iMovie generated – the thumbnails are sideways are squished for some strange reason, but the actual video is in landscape mode! 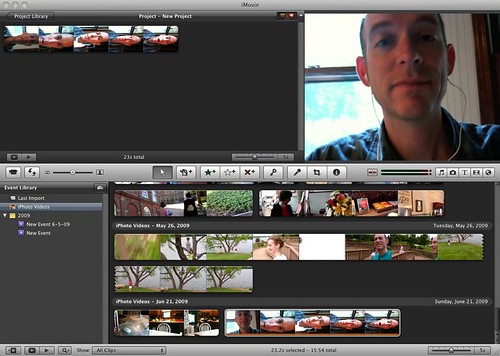 It’s quite possible I just haven’t figured out something yet, but this is a bit irksome. Otherwise, uploading to a variety of places seems to work fine. So far, I have been able to upload my videos to:

And one more thing – editing. Yes, you can do some extremely basic editing of your iPhone video – right on the iPhone. Here’s how it looks: 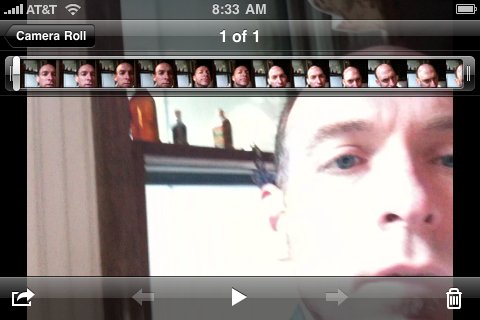 See the timeline at the top of the video? You can click the beginning and ending points and trim the video’s beginning and ending. And that’s all. But that’s ok – I’ll probably end up dumping video to my Mac anyway for editing later. For some people, this will be pretty useful stuff.

So – my iPhone video report so far… will david figure out how to succeed in landscape mode? Will Apple usher in a new era of vertical video? Don’t hold your breath to find out!