Anyone going to OCLC’s EMEA Regional Council Meeting – Libraries at the Crossroads: Resolving Identities – in February, in Berlin?

I’ll be there – I’m giving the closing keynote presentation on Wednesday. Looks like it will be an interesting, “make-you-think” conference focused on technology changes and emerging trends (and probably a lot of other stuff, too).

For the eighth edition of our EMEA Regional Council Meeting, we are inviting you to Germany, where we have the biggest number of OCLC members in the region. The meeting in Berlin is an opportunity and a chance for OCLC members and other delegates across the EMEA region to get to know each other and network. By joining us and participating in the various plenary and breakout sessions, member libraries from around the region are able to explore the trends that are shaping the future of libraries. The programme will not only be composed of inspiring keynote sessions, but also a large number of OCLC member library sessions. By sharing our own experiences, we will advance further together.

I’m really looking forward to it. So if you’re thinking about attending – go ahead and register, and come say hi! 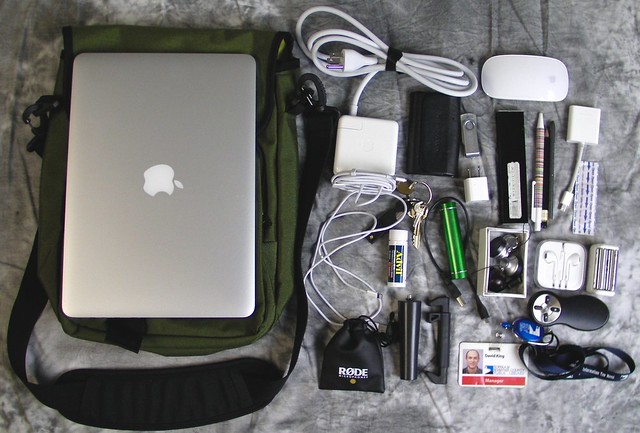 What do you carry around every day? I just reassessed what’s in my bag … because I purchased a new one.

I’ve been an avid fan of Timbuk2 bags, and have owned three of them. The first two lasted a couple of years, and then theÂ strap broke on the first one, and the second one developed a lovely little hole.

The third one’s been fine, but I recently changed from a 15″ laptop to a 13″ laptop … and the 13″ is MUCH smaller. SoÂ I decided to treat myself to a new laptop bag.

This time, I decided to try another bag. I’ve heard good things about Tom Bihn bags, soÂ I bought the Tom Bihn Ristretto bag, made for 13″ laptops. Short story on this bag: I had been eying the oliveÂ bag, but when I finally went to purchase it, they didn’t have any more olive bagsÂ listed. So I emailed customer service and asked if there happened to be any more lying around the office (and really didn’t expect to hear back from them).

Guess what? Someone from the company promptly emailed back and said I was in luck – there was ONE more olive bag, and she’d hold it for me! So I’m pretty sure I have the LAST OliveÂ Ristretto bag :-). Great customer service from Tom Bihn (and thanks Hannah)!

So what am I carrying now? Here’s a list (the photo in this post is my stuff, too):

I’ve been doing a lot of traveling the past 7-8 years, mainly for speaking and consulting engagements. And I have picked up some travel tips along the way, including:

1. The airline doesn’t always provide a room for the night if your flight is delayed, even if they promise they will.

2. Some airports are more comfortable to sleep in than others.Â (see #1)

3. If you return your rental car in great condition, but then the rental car company wants to charge you for a bunch of damage, your insurance agent can help (apparently one of the airport rental car employees banged up the car after I returned it, and tried to blame it on me. Didn’t work).

4. If you travel internationally, bring along some familiar cold and flue meds. Just in case. (Hat tip to Sarah Houghton for this one).

I have two more things to add to my list of interesting travel tips that I picked up on my trip to Monterey for Internet librarian 2013 (great conference, by the way – I picked up a bunch of useful stuff this year! If you’ve never been, you should think about attending).

What did I learn?

5. You have to communicate with the airline if you miss your flight, or they will automatically cancel your whole round trip ticket.

I booked my Kansas City to Monterey flight pretty early. Then my travel plans changed, and I needed to go to Chicago for a meeting first, and then travel to Monterey from there. And to complicate things further, my family drove me up to Chicago (to see my oldest daughter).

Instead of flying out of Kansas City, I needed to fly out of Chicago … but I already had a round trip ticket from Kansas City to Monterey and back. And of course simply canceling my first ticket included a $200 dollar cancellation fee. Yikes!

So, instead of paying a cancellation fee, I booked a second one-way flight for about $170, and just ignored my first flight, figuring that I’d be a no-show, and everything would be fine for my return trip home, since it was already booked, and I hadn’t canceled anything. $30 bucks saved, right?

On Wednesday night (last night of Internet Librarian), I tried to check-in to my return flight. I opened up my United iPhone app, tried to check in, and received a â€œthis trip is canceledâ€ message. Huh? So I logged into my Expedia account, and found the same thing. Canceled.

Then I called Expedia’s customer service (after hunting for their phone number – not easy to find), and explained my situation to them. They helped me book a one-way ticket back to Kansas City (my home airport).

Who knew? When I’m traveling and a flight gets delayed, I get all sorts of warnings and reminders on my iPhone. Texts and emails from Expedia and the airline, and alerts from TripIt Pro (an iPhone travel app I use), all warning me of impending doom and plane delays. United even calls me with one of those silly automated â€œyouâ€™ve been delayedâ€ recordings. Multiple times.

But when you don’t show up for your flight? No calls. No texts. No emails. They â€œhelpfullyâ€ decide to cancel everything and take all your money anyway.

6. When you accidentally break a lamp in a hotel room, the hotel replaces it and they don’t charge you.

This was a first for me. I knocked a lamp off the table in my hotel room. The lightbulb shattered, and the fish tail statue on the fancy lamp broke in two.

It’s especially embarrassing if, say, you sheepishly decide to prop up the broken fish tail statue on the lamp so that it looks “normal,” and hope the cleaning staff won’t notice.

It’s even more embarrassing if you decide to visit Walgreens to buy some Crazy Glue to â€œfixâ€ the lamp, then get back to your room and discover that the hotel has already replaced it. Thankfully, the hotel didn’t charge me for that (’cause, you know, I’m gonna need that extra money to pay for those three plane tickets).

Lesson learned: when you break a lamp, the hotel finds out anyway and replaces it. No questions asked, no extra charges given. At least at the Monterey Marriott. Your mileage may vary. Probably a good thing to just report it to the front desk.

Do you have any weird or useful travel tips you’ve picked up along the way? Share them in the comments! For my Australian readers and friends – I’m visiting you guys in September!

And I have a pretty busy schedule. Here’s where I’ll be talking:

If you’re able to attend one of these events, come say hi – I’d love to meet you!