Recently, I had two things published:

Here’s the blurb for my Library Technology Report:

“Most of your library customers own a smartphone, using it for a variety of tasks. They want to use their smartphones in and around the library. This issue of Library Technology Reports (vol. 57, no. 2), “Mobile Technology in Libraries,” presents tools and practices for giving your customers a great experience while connecting with your library. It addresses provisions supporting customers’ mobile use inside the library, such as Wi-Fi and charging stations, or outside the building, offering mobile access for basic library tasks. The report will show ways in which libraries are using mobile technology to address the digital divide, such as circulating hot spots or training, and how staff can use mobile technology to expand services in the community.”

Hope you find them useful!

The Pew Research Center just released their newest report on mobile technology and Home Broadband use. Check it out – there’s some really interesting stuff in the report, as always.

Here are some highlights:

Another interesting tidbit: smartphone ownership doesn’t vary much across economic, racial, ethnic, and educational backgrounds. But home broadband use does.

The report also said this: “Roughly four-in-ten non-adopters report having other options for internet access outside of their home” … “other options” hey, that’s us!

What should we take away from this?

What else? Please share your thoughts in the comments!

My youngest daughter is in college, and needed to type in pages of text from a book for a project she’s working on. My wife was helping her with this, and had a thought … so she asked me “do you think there’s some sort of app that will let you take a picture of this page and turn it into text, so we don’t have to type so much?”

Good question! That translated in my techie head to “look for an OCR app,” which I did, and which I found (look for the OCR Scanner in Apple’s App store). It worked great, and just like my wife described – take a picture of the text, push the magical “OCR” button … and we had text. Sweet!

It worked remarkably well. The app apparently didn’t like the letter J, but otherwise it did a great job of turning an image of text into actual text.

Which made me realize just how far we have come! I was an academic librarian early in my career, and we talked about doing OCR scanning of rare books. The scanners were (maybe still are) pretty expensive. It wasn’t always very accurate and definitely required some serious clean-up work.

But this? I already have a phone. The app? Free. Sure, the app could have been better – there wart a slightly wonky process of doing the scan, then copying/pasting the text into an email (there didn’t seem to be a “save” feature in the app). I wouldn’t want to repeat that for a whole book of scanning! But that’s just the first free app I found. I’ll guess there are others that might work better.

Just a realization that if you need something:

Before I head off to #alaac18, I thought I’d share what my library is doing with iPads.

Right now, we are using iPads in the building in three different ways:

That’s what we are doing! Actually using iPads isn’t necessary – we could do the same thing with Android tablets. Either way, they are pretty handy additions to our building – reservations, easy-to-add library catalog access, and an interactive experience in an art gallery.

How are you using iPads in your library? Please share! 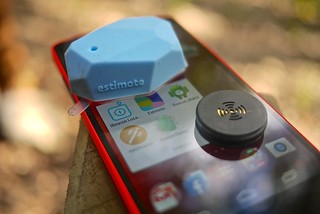 I’ve shown what iBeacons are, and what they do in non-retail settings. Can they be used in a library setting? Definitely – because some libraries are already experimenting with them!

There are currently two companies in the library industry working with iBeacons (that I know of, anyway):

What are these companies focusing on?

Bluubeam sends out location-based messaging. For example, if you walk into the teens area of the library (and have the Bluubeam app on your mobile device), you might get a message about what’s happening in the teen section that day, or get a message about an upcoming teen event.

So think location-based promotion of events and your stuff.

Patrons who have authenticated their account information in your library app can receive notifications about items due that day, items ready for pickup, and much more when they enter the building. Library staff know that patrons often visit the library and forget they have items due that day. Automatically reminding them to stop by the circulation desk and renew them before they leave is a great customer service.

What types of things could you do with iBeacons in a library? Here are some ideas:

Again – there is potentially a LOT of possibility here. What do you think? Please share!